For many people who often exercise, the resistance band (also known as an elastic band) may be the least valued one of the common fitness equipment. Resistance bands may not bring you a more intuitive training effect and feel like dumbbells and barbells, but their strength is imperceptibly affecting your training effect.

3. Cheap and easy to carry

In fact, there is no need to say more about this. The price of the resistance band is relatively low and will not increase your fitness cost; Moreover, the resistance belt is small, light, flexible, and easy to carry. When you can't go to the gym for training, you can easily put the resistance belt in your bag or suitcase. You can take it to the office or business at any time.

I PURCHASED THIS BAR AS A BIRTHDAY GIFT FOR MY ADULT SON AND IT WOULD NOT WORK IN HIS HOUSE ANYWHERE. WHEN I CONTACTED THE COMPANY ON HOW TO PROCESS THE RETURN, THEY SAID THAT EVEN THOUGH THE BAR COST $99, IT WOULD COST OVER $200 TO RETURN THE ITEM. THEY WERE WILLING TO CREDIT ME $50 AND LET ME KEEP THE BAR. I HAVE NO USE FOR THE BAR BUT DON'T WANT TO PAY THE EXORBITANT PRICE OF THE RETURN. SO, MAKE ABSOLUTELY SURE THAT IT IS EXACTLY WHAT YOU WANT BEFORE PURCHASING AS THE RETURN IS UNREASONABLE!!

This product came in its original packaging. However everything- including the box- was intact. The package contained the pull-up bar, user manual and a product registration card.

I
Fitbeast Back Roller Wheel IS
Helps with muscle knots

Works as advertised, helps with my back muscle knots. Two sides are useful for the soft and firmer side. I've used this almost daily.

The utility is amazing I can use this for sit ups, push ups and use resistance bands honestly it pretty amazing how much more you can get out of on product. I would highly recommend this to anyone who wants a pull bar at home.

I just bought this product! It took about a couple of hours to set it up since I didn’t have a bar that was high enough up to hook it on! I bought a chain to allow the weights to touch the floor and it is perfect! Such an affordable product and it had a back bar which is the reason i bought it! Very excited and happy! 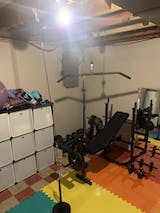